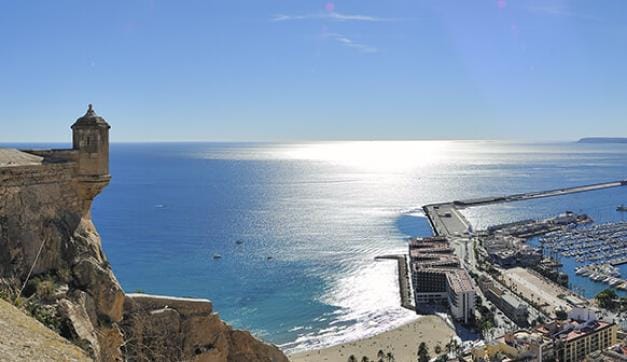 Alicante has a wide range of sports facilities to offer, and often hosts international events and competitions.

has been a host to many international sports events. It has been the for the Volvo Ocean Race Regatta since 2008 and was home to the classification phase of the Eurobasket 2007, base port for the 2002 and 2007 Tall Ships Regattas, host to the Davis Cup Semi-Final in 2004, the 17th World Rhythmic Gymnastics Championship in 1993 and the Football World Cup in 1982.

The city is amply provided with excellent facilities for football. The area of Monte Tossal has four pitches within 500 m of each other, including the Rico Pérez Stadium (official stadium of Hércules C.F), and the Complejo Deportivo Antonio Solana, with three more pitches. Monte Tossal also has facilities for athletics training at the Estadio Municipal de Atletismo Joaquín Villar, and has indoor sports complexes such as the Centro de Tecnificación, with seating for 5,000, and the Pabellón Municipal Pitiu Rochel with seating for 1,800 spectators.

has a number of officially recognised urban circuits for national and international competitions in athletics and triathlon. The city has two large 18-hole golf courses very close to the city centre: Alicante Golf and El Plantío. It also offers excellent facilities for tennis and paddle tennis at the Club Atlético Montemar (21 tennis and 10 paddle tennis courts) and the Arena Alicante sports centre (14 paddle tennis and 7 tennis courts), in the Playa de San Juan area.

Besides all the outdoor and indoor swimming pools you can find here, the city also has open sea swimming lanes available throughout the year. One, at , is the longest permanent swimming lane in . has six beaches, while Playa de offers large areas specially designed for sports with volleyball, basketball and mini-football nets, all on the sand.

Click here to see all the sports facilities the city has to offer, along with the calendar of sports events and competitions: Sports Tourism Alicante